[K-Exclusive]: P1Harmony’s Memorable Night in the City of Angels ⋆ The latest kpop news and music 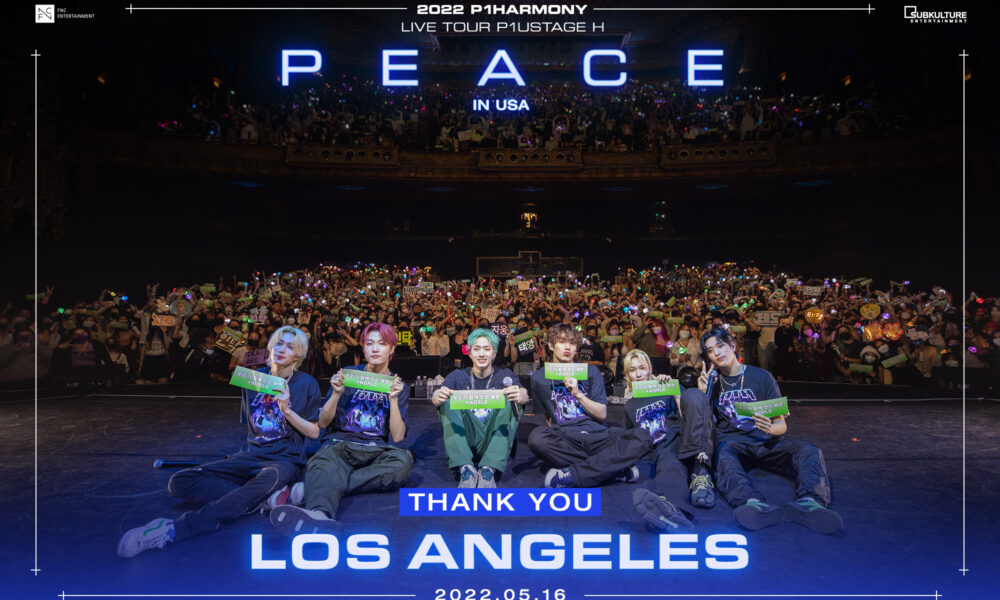 [K-Exclusive]: P1Harmony’s Memorable Night in the City of Angels

Resuming their previously postponed U.S. tour, P1Harmony returned to Los Angeles for two nights of their 2022 P1Harmony LIVE TOUR [P1ustage H : PEACE] in USA this past week. With the tour previously slated for March of this year, unfortunately, due to COVID-19 related reasons, the group had to postpone the last few stops. Thankfully, this did not deter fans, known as P1ece, from making their way to The Theatre at Ace Hotel on a Monday night to see the boy group perform.

Kicking off the show with high energy, the boys stepped on stage and immediately went into “Pyramid,” “Bop,” and “Do It Like This” before officially greeting their fans. With promises for a fun night, the group certainly lived up to their words. Not only did they perform some of their most popular high energy songs such as “Scared,” “Siren,” and “Follow Me,” they also slowed things down with “If You Call Me” and “Butterfly,” giving fans a little break from jumping around. Choreographing little moves for fans to follow, Keeho had P1ece get down low and jump up on cue during one song, and had fans do the wave with them during one of their ments.

Aside from their title songs and stages, the six members also prepared unit stages as gifts for their fans. The unit stages began with Soul, who did a freestyle dance that he does differently at each stop. After that, Theo and Jiung performed Justin Bieber’s “Off My Face,” showing off their beautiful harmonies. Finishing up the unit stages, Keeho, Intak, and Jongseob performed a powerful rap stage to “Big Three.”

Unsurprisingly, P1Harmony also excels in fan service. With the phrase “City of Angels” in mind, Keeho asked the audience if they would be their angels. From there, Intak mentioned how beautiful their angels’ wings were, and Jongseob asked their P1ece to stop flapping their wings to save their energy. While the six boys were on stage, they loved joking around with one another, and with their fans. As the show came to a close, P1Harmony performed an English version of their song “Do It Like This,” and walked along the edge of the stage as they did, picking up gifts, props, and lightsticks from their P1ece.

QUIZ: How Much Do You Know About ONEUS' 7th Mini Album "TRICKSTER"?

KARD Makes An Impressive Return With “Re:”

We will be happy to hear your thoughts

“koreamade is a participant in the Amazon Services LLC Associates Program, an affiliate advertising program designed to provide a means for sites to earn advertising fees by advertising and linking to Amazon.com“

As an Amazon Associate, we may earn commissions from qualifying purchases from Amazon.com. You can learn more about our editorial and affiliate policy